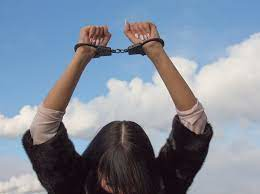 Recently, there has been a rise in discussions about the need for stronger rules and regulations to safeguard women. There are many confusions regarding the existing provisions and laws.

In India, one such concern is that of police officers putting up inappropriate behaviours while arresting women.

There have been numerous incidents that show women being harassed during getting arrested or being in the lockups. However, lawmakers have made laws that safeguard women from such atrocities.

One of the main things to be kept in mind is that when arresting a woman, her submission to the custody shall be primarily done by oral intimation but if circumstances arise, no one except for a women officer can touch her.

There are a lot of things that people are unaware of in respect of a women’s arrest among which is the time of arrest of a woman.

What do various sections of the CrPc say about arresting a woman?

This section makes it mandatory that no women can be arrested after sunset and before sunrise (i.e. 6 pm to 6 am).

Nevertheless in exceptional incidents, if the police need to arrest a woman in between the time of sunset and sunrise, they need to take prior permission of the magistrate under whose local jurisdiction

(i)Either the offence is committed or
(ii) The arrest has to take place.

And even after seeking permission, only a female police officer can arrest a woman. There are no specific exceptional cases listed in the code, so the decision of considering a situation to be an exception depends solely on the magistrate.

If an officer doesn’t follow these laws or does anything that violates the laws, the woman arrestee can complain about this to the magistrate along with the station head officer.

Why does this section exist?

The main reason for making this law was to safeguard the modesty of the woman arrestee to protect them from harassment and exploitation.

The lawmakers wanted to ensure that even in exceptional cases, the women feel safe. any arrest made in violation of section 46 (4), will be considered an illegal arrest, and the officials will be liable for disciplinary proceedings.

Some other laws related to the arrest of a woman.

There are some other laws in CrPc as well regarding the arrest of a woman. They are:-

What are the legal issues that self-driving cars face?