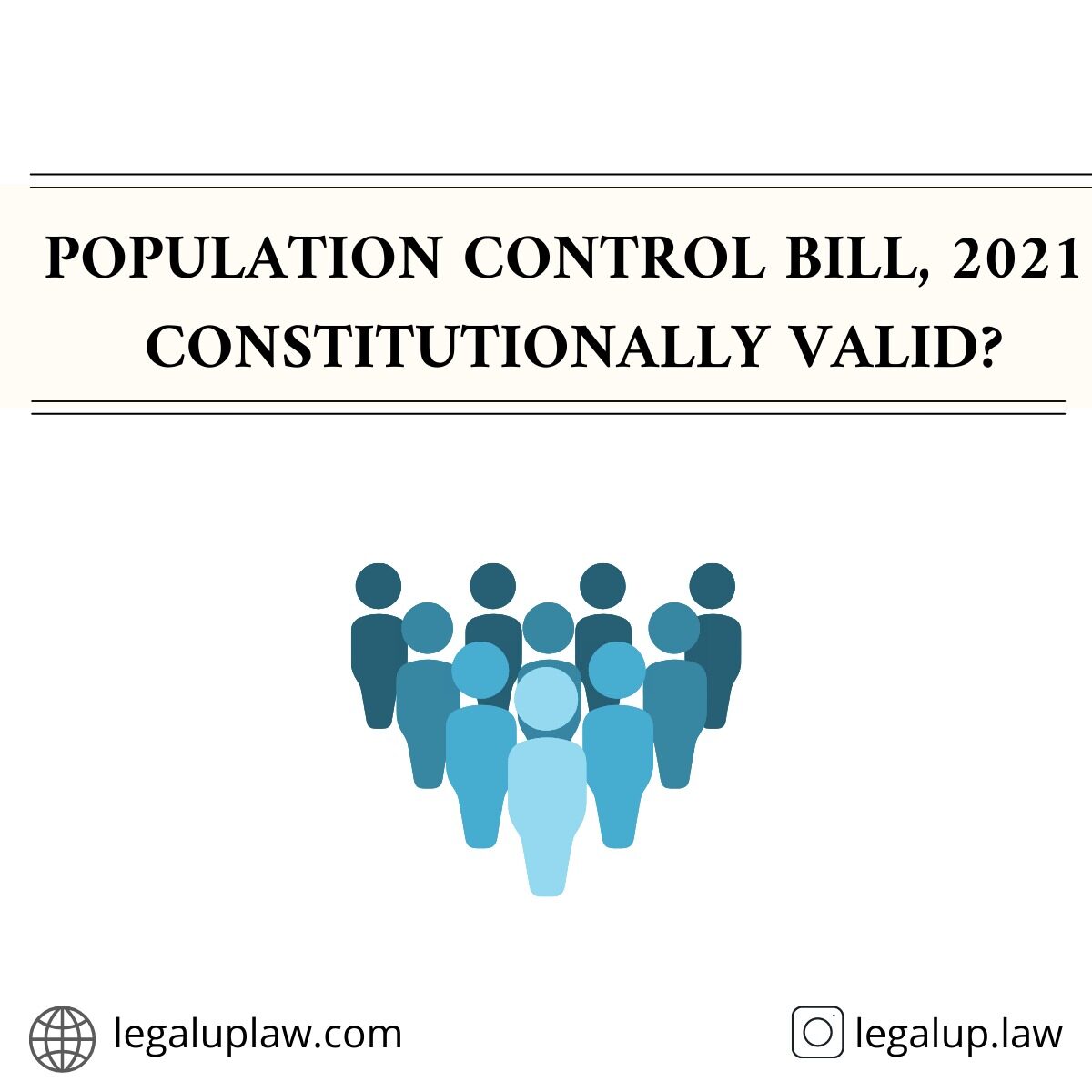 Uttar Pradesh population (Control, stabilization and Welfare) Act, 2021 is the bill basically programmed for controlling the increasing Population of Uttar Pradesh, which is also the most populated state in India. The main objective behind the same is to achieve the target of 2.1 TFR by 2025. Also, to maintain the balance of limited Ecological and Economical resources and procure the same for future generations.

What is Total Fertility Rate (TFR)?

It is obtained by summing the single-year age-specific rates at a given time. As of 2020, the total fertility rate varied from 0.84 in South Korea to 7.0 in Nigeria.

The Population Control Bill propagates the Government Policy for dealing with the Population bulge, although many critiques were in direct conflict with the same.

Also, another interesting question before the Lawmakers in the application of the Population Control Bill. Since Indian being a contemporary country, the population is diverse, therefore this very fact makes the need for a necessarily Application clause wherein, the Bill expressly mentions that the application is on the married couples, wherein the boys should be above twenty-one years of age and Girls are above eighteen years of age.

What is the reaction of the other States?

Many State Governments like Assam, Maharashtra, Rajasthan, Uttar Pradesh are in the favour of the Population Control Act at the National level, to ease down the Population load over the limited resources. Although making the sudden curb in the incentives and benefits were reluctant. But on the contrary to the same certain benefactor are seen in the act to all those people who go through voluntary sterilization.

Certainly, additional incentives are given to Public Servants under the same Provision like two additional increments in the entire service, soft loan construction on low-interest rates, maternity and paternity leave with all allowance and salaries, free health care facilities, and insurance coverage.

What are the important provisions of the population control bill?

The Bare Bill signifies and states many provisos which relate to the individual capacity to get incentives and disincentives. Also, whether the individual is contravening the population control bill in different scenarios. Herein more pragmatic examples are taken into consideration and solutions to the same is provided. For the same, certain illustration is also given concerning the cases wherein the Personal Laws are applied.

There are different Provisions regarding Multiple Birth are expressly given as the exception under the Chapter Three of the Bill. Under Section 13 of the Population Control Bill, it is mentioned, that, if a Couple has one Child from First Pregnancy and a Multiple Child from the Second Pregnancy, then the Couple will not be deemed to Contravene the Bill. Additionally, in the case of Personal laws allowing more than one marriage, in such cases, the Husband shall have a maximum of two children from all his marital relations to avail the benefits under the Population Control bill.

Also, Under Section 18 of the bill it is clearly stated, if any husband comes under the Contravention of the two-child norms, he would not be allowed for the benefits and incentives under the same also, as the repercussion he must have to face the disincentive too. Also, in the given case, the mere ineligibility of the Husband to get benefits does not preclude women or children to get incentives.

Thereafter, under section 8 of the Population Control bill, if contravenes the bill, after the commencement, becomes ineligible to get incentives under the bill. Additionally, he/she is debarred from the benefit of government-sponsored welfare schemes, also, limiting the ration card units up to Four.

Also, Under Section 9 of the bill, bar on the election of the local body, in contravention of the two-child policy, the person who contravenes eventually becomes ineligible for the contesting local body election. Wherein I am opined that it is again in violation of the constitutional right of an individual.

What Data are estimated and cited by the Government?

According to the researchers in this field, UP Fertility Rate is Gone down to half of what it was in 1993. In 1993 Fertility rate was around 4.8, which is in 2016 is 2.7. So, accordingly, there is no dire need for the Population Control bill, rather Government should work on the Contraceptive measures and increase the awareness of the same through welfare societies.

What do the critiques have to say about the bill?

This Bill could result in creating an imbalance in society between adults and millennials. As the Population Control bill tends to control the Fertility rate. China is the Country to see the worst effect of one child Policy, as society started ageing which eventually, lead China to ease down the regulation regarding it in 2016.

China is the country that implemented a one-child policy in 1978, which was disintegrated in the year 2016. The reason cited by the government was the Ageing Population of the Country.

Also, some of the opinions Surfaced in media, that, the Population Control Bill is indirectly contravening the Fundamental rights given under Article 21 of the Indian Constitution. Wherein the, under the ambit of Right to Privacy Women has the right over their own Reproductive health.

But contrary to this, it is very pertinent to mention that, the overgrowing population is an imminent danger to the Limited Resources therefore Stringent rules are a must deal with the current situation.

Therefore, it would be conclusive to say that, people inducting the in the benefits and exclude from the benefits could only be dependent on the reasonable and pragmatic decision of the individual. As in the present times, it is tough to suffice the needs of more than two children, so making the same decision productive and constructive for the people and upcoming generation.