Unlawful Activities(Prevention) Act, 1967 (UAPA)- Everything you need to know. 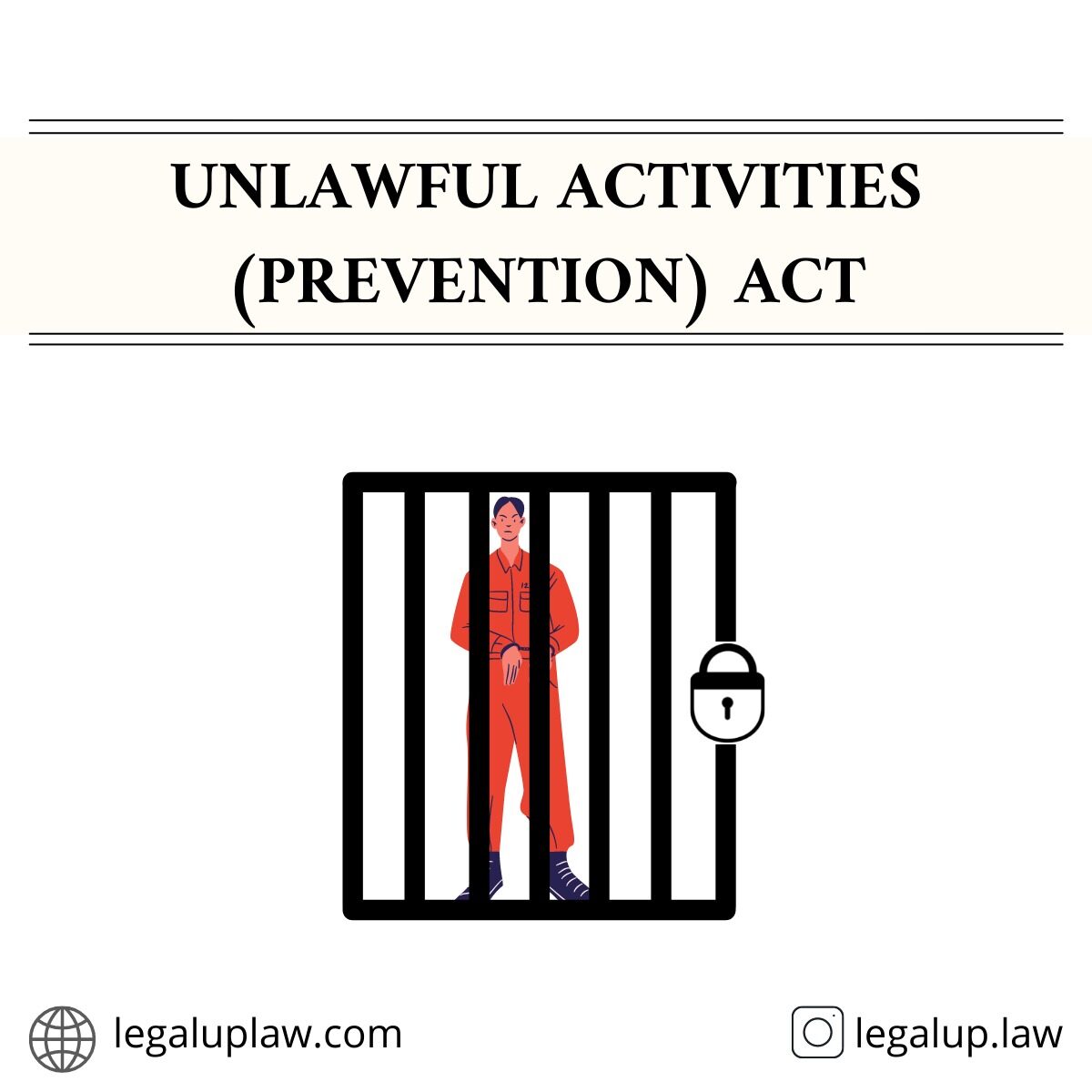 What is the Unlawful Activities (Prevention) Act, 1967 (UAPA)?

The Unlawful Activities (Prevention) Act, 1967 (UAPA) was developed as an Act to provide for the more effective prevention of certain unlawful activities of individuals and associations, and for dealing with terrorist activities, and for matters connected therewith.

The Act was there in place since 1967 but the Government of India felt the need to make its first amendment in 2004 after the Terrorist Activity Prevention Act, 1987 (TADA) and Prevention of Terrorism Act, 2002 (POTA) were repealed in 1995 and 2004 respectively. Subsequently, there was a dire need for terrorism laws. Therefore, a dedicated chapter was introduced defining ‘Terrorist activities’ (chapter IV) in the amendment of 2004. All these Acts like UAPA, TADA AND POTA are termed draconian laws or Black laws. They are termed black laws due to their harshness and their powers to the respective governments.

Experts of criminal law have always favoured that the law should be tilted towards the accused, especially in these cases because the state or central government has enormous powers compared to an individual who might have been charged under false pretences under such draconian laws.

What does the data say about UAPA arrests?

The data clearly indicates that there has been a rise in cases registered as well as the arrests made every year.

According to the data revealed by the home ministry, there has been a 72% rise in arrests between 2015 and 2019.

The data also revealed that just 2.2% of the cases registered under the Unlawful Activities Prevention Act result in court convictions.

Out of a total of 5922 arrests under the Unlawful Activities Prevention Act (UAPA) between 2016-2019, only 132 people were actually convicted.

This is an indication that the Act has been used discriminately and has been misused on several occasions. UAPA has been used to criminalize mere thoughts and political protests that cause “disaffection” with the state. It is an assault of citizens’ right to an expression which is also a collective right of groups and unions to disseminate their views and UAPA majorly targets this right.

What is the International Opinion?

India was also ranked at 142 on the World Press Freedom Index.

The marginal decline in the reputation of our nation can be traced back to the misuse of laws such as Criminal Sedition and UAPA by the Central Government to curb dissent and suppress protests, etc.

The report stated that India’s status has declined from free to partly free due to a multiyear pattern in which the Hindu nationalist government and its allies presided over rising violence and discriminatory policies affecting the Muslim populations and pursued a crackdown on the expression of dissent by the media, academics, civil society groups and protesters.

The government has from time to time introduced new laws to curb freedom and violate the rights of citizens. The plight of the Indian journalists is not in hiding anymore after the release of the world press freedom index and the Pegasus spyware scandal.

What are the Amendments made in the UAPA?

The primary objections to the Amendment are under Section 35. The Government has the power to categorize an organization as a terrorist organization, and the amendment has extended the power to include within its scope the categorization of individuals as terrorists.

It also directly violates Article 21 of the constitution. it confers upon the government broad discretionary powers and also authorizes the creation of “special courts with the ability to use secret witnesses and to hold closed-door hearings.”

There have been many recent cases that have come into the spotlight due to the misuse of UAPA to detain human rights activists, student protesters, government critics and journalists as well.

The high court granted bail as it thought that the trial was going on for too long without any conclusion. The Supreme Court held that even though the accused has been found prima facie guilty by the NIA, there is a provision under Section 43D (5) of UAPA to deny bail. However, the courts can grant bail if the provisions under any laws violate the accused’s constitutional rights.

In the present case by the facts put forth, it was crystal clear to the Hon’ble Supreme court that the ‘right to a speedy trial has been violated. It is not out of place to state here that Section 43(D)(5) of UAPA is under major scrutiny, as it gives special authorization to the NIA special court to deny bail if deemed necessary. What is pertinent here is that the word ‘necessary’ has neither been defined by the Act nor by any judgment. Therefore, this Section can be misused by the investigating authorities.

Then there were the cases of the three students arrested in March 2020. Lower courts had dismissed the bail pleas in their cases as it was filed under the stringent UAPA. The high court also appeared concerned about the nature of these allegations, saying in the Narwal and Kalita’s bail orders, “We are constrained to say, that it appears, that in its anxiety to suppress dissent and in the morbid fear that matters may get out of hand, the State has blurred the line between the constitutionally guaranteed ‘right to protest’ and ‘terrorist activity. If such blurring gains traction, democracy would be in peril.”

While granting bail to the three student activists, the Delhi high court said that terrorist activity cannot be broadly defined to include ordinary penal offences.

Delhi High court found no prima facie case against Natasha Narwal, Devangana Kalita and Asif Iqbal tanha and held that right to protest is not a terrorist act under UAPA.

The continuing threats of anti-terrorism law on the fundamental rights of innocent people is a point of concern in the opinion of the experts.

The Government has time and again used draconian laws such as sedition and criminal defamation laws to silence dissent. UAPA empowers the parliament to restrict the rights and freedoms of citizens to protect ‘the sovereignty and integrity of India’. The legislature in realizing the purpose of this Act has eroded human rights.

These laws are vaguely worded and overly broad and have been used as political tools against critics.

It is being used to suppress dissent through intimidation and harassment thus threatening the very existence of public debate and freedom of the press and criminalizing the performance of civil liberties.

Under UAPA a longer period of custody is allowed without judicial scrutiny and can simply be used to bypass fundamental rights and procedures.

Worldwide in the field of penology, It has been time and again held and proven that retributive and deterrent forms of punishment do not affect the homicide rates. Therefore, we should adopt theories that are in sync with the constitutional values as well as the cultural values of our nation. Therefore, by amendments in the UAPA act, the law should be made more compatible with the due process to achieve justice rather than using the law as means to terrorize and curb dissent against the critical evaluation of the policies of the Government of India.

The need of the hour is the narrow interpretation of such provisions. The Courts have from time to time held that if law enforcement agencies think that the regular law and order provisions can be used to tackle such offences then there is no need for the use of preventive detention provisions or any other provision under UAPA or any such draconian law.

“The law of preventive detention,
of detention without trial is an anathema to all those who love personal liberty. Such a law makes deep inroads into basic human freedoms which we all cherish and which occupy a prime position among the higher values of life.”

What are the Essentials of a Valid Contract?

The Taliban: A petrifying takeover for the World and Economies