What are the Essentials of a Valid Contract? 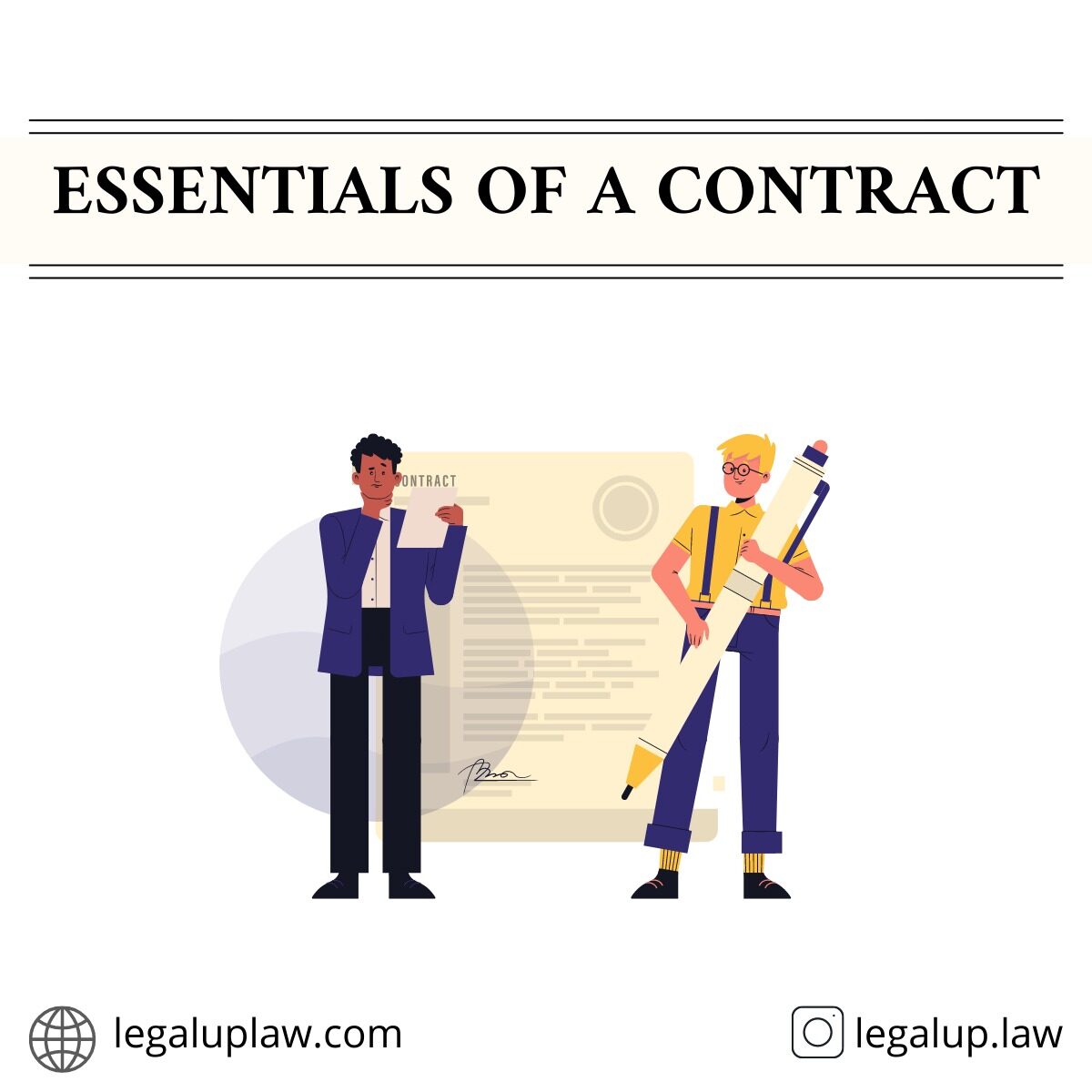 The Indian Contract Act,1872 was enacted on 25 April 1872. It lays down all the provisions concerning contracts and governs all the disputes related contracts in India. This Act is predicated on the principles of English Common Law. It’s applicable throughout India. My paper aims to give an understanding of the meaning of the word contracts and which contracts are enforceable by law. There is a difference between social and legal contracts. The below definition has given by Salmond which states that “A contract is an agreement creating and defining an obligation between two or more persons by which rights are acquired by one or more to acts or forbearances on the part of others’’

In today’s world, it’s common to use the word contract. On daily basis, we enter into a contract without knowing its essential elements for a legally valid contract. The set of promises between two friends, brothers, relations are generally considered as a contract. But when it comes to the legality of the word contract, there are some essential conditions/requirements which require to be fulfilled to make a legitimate contract

In simple terms, a contract means when two parties put into writing an agreement that contains certain obligations (promises) which are to be performed by such parties, and when such written agreement becomes enforceable by law, it becomes a Contract. Enforceable by law means when the agreement has acquired the force of law and a violation of these obligations would attract action, [1]including repudiation of the whole contract.

According to section 2(e), every promise that forms the consideration for others is an agreement.

For a valid contract, certain essentials need to be fulfilled that as an offer, acceptance, intention to create a legal relationship, consideration, capacity to contract, lawful object, free consent and discharge of contract.

Essentials of a valid contract

2)  Intention to create a legal relationship

There must be an intention to create a legal relationship. Promise in the case of social agreements is generally without any intention. Therefore, an agreement to play a game, to go for a walk, or to call some friends to dinner cannot be enforced.[2]

In the case of Balfour vs. Balfour, (1919) 2 KB 571, the validity of an agreement was in question. The defendant that is the husband went to England with his wife on leave. His wife fell ill. The husband had gone to Ceylon where he was employed and promised to pay 30 euros per month. The husband failed to pay the amount after some time and was sued by his wife. The court held that it was not a contract and was only a moral obligation.

The acceptance must be communicated to the other person and should be absolute and unconditional. It must be made in a reasonable manner and in the mode which has been prescribed. Acceptance by post, telegram, the telephone may be considered to be the modes that are prescribed. Mere silence does not amount to acceptance. In the case of Felthouse vs. Bindley,

Felthouse wrote a letter to his nephew to buy a horse. In the letter about the offer, it was mentioned that if no more is heard about the horse, it will be mine. The nephew did not reply to the letter but told the auctioneer to keep the horse for his uncle. Bindley, the auctioneer disposed of the horse. Felthouse brought a case of conversion against the auctioneer and it was held that since the acceptance of the offer was not communicated to the uncle, the action for conversion failed.

It is an important element of the contract. It is laid down in section 2(d) of the Indian Contract Act. It means something in return for the offer. An agreement without consideration cannot be enforced by law because both parties need to get something from each other. There are exceptions to this rule. A written agreement, made out of affection is not void if it does not have considered. It must be registered and in writing.

The consideration must be real and need not be adequate. For example. A promises to give B 10,000 Rs in writing and registers it. This is a valid contract. The definition of consideration is the desire of the promisor. In Durga Prasad vs Baldeo, the plaintiff constructed some shops at the request of the district collector. The constructed shops were given for rent for doing business to the defendant. The plaintiff’s action to recover commission was rejected, as the act was done at the request of the district collector.

Section 10 of the Indian Contract Act lays down what agreements are contracts. Any person who is a major is competent to contract. A contract entered into with a minor is void ab initio but there is an exception to the rule. If the contract is beneficial for the minor, it cannot be void. Also, a person should have a sound mind and should not be an idiot, lunatic or drunkard. Certain people are disqualified by law to contract which include alien enemies, foreign sovereigns, convicts, corporations and insolvents.

They include agreements that are illegal, immoral, against public policy and wagers and is fraudulent or injures the third party. If the object of the agreement belongs to any of the categories, the contract is unenforceable. Section 23 lays down circumstances when consideration is not lawful. For example. A promises B employment if he pays him 2000 Rs. The object is unlawful.

The consent must be free and should not be taken by coercion, undue influence, fraud, misrepresentation or mistake. It becomes voidable for the person whose consent so obtained is not free. [4]

Under Section 22, the unilateral mistake is the mistake committed by one party as to the matter of fact which cannot render the contract void. It is generally not used as a defence but there are certain exceptions to it including mistaking the identity of the person in the contract and the nature of the transaction.

When the parties fulfil their obligations, the contract comes to an end which is called discharge of contract.

2) Discharge by agreement or consent

A) Novation – A new contract is substituted for an old contract.

B) Rescission– The parties can rescind the contract and the old contract is discharged.

C) Alteration– It is when one or more terms are altered by the consent of the parties under Section 62 of the Indian Contract Act.

D)  Remission– Acceptance is made on the promise but is done to a lesser extent.

E) Waiver– Parties abandon their duties to the contract.

F) Merger– Some terms or all the terms are merged into another contract with the mutual consent of the parties.

3) Discharge by breach of contract

4) Discharge by lapse of time

Time is extremely important in a contract. According to the Limitation Act, a contract should be performed within the specified period of time and a suit can be filed within that period for failure to perform their part.

5) Discharge by operation of law

A contract gets discharged by operation of law either because of the death of either of the parties or insolvency or merger or the unauthorized alteration of the terms.

6)  Discharge by the impossibility of performance

Discharge can become impossible with or without the knowledge of the parties. It can become impossible at the starting of the act and after the parties have become a part of the contract under Section 56 of the Indian Contract Act. Supervening impossibility can take place when the subject matter has become destroyed, non-existence of particular state of things, death or incapacity, change of statutory provisions.

The essential of a legitimate contract is that the very vital and fundamental values of a contract must be accomplished, but there could also be additional requirements imposed by a special law or from a specific sort of contract. If any of them are not fulfilled, it would not be enforced by law.

This article is written by Panya Sethi, a 3rd-year law student at Symbiosis Law School, Noida.

Unlawful Activities(Prevention) Act, 1967 (UAPA)- Everything you need to know.