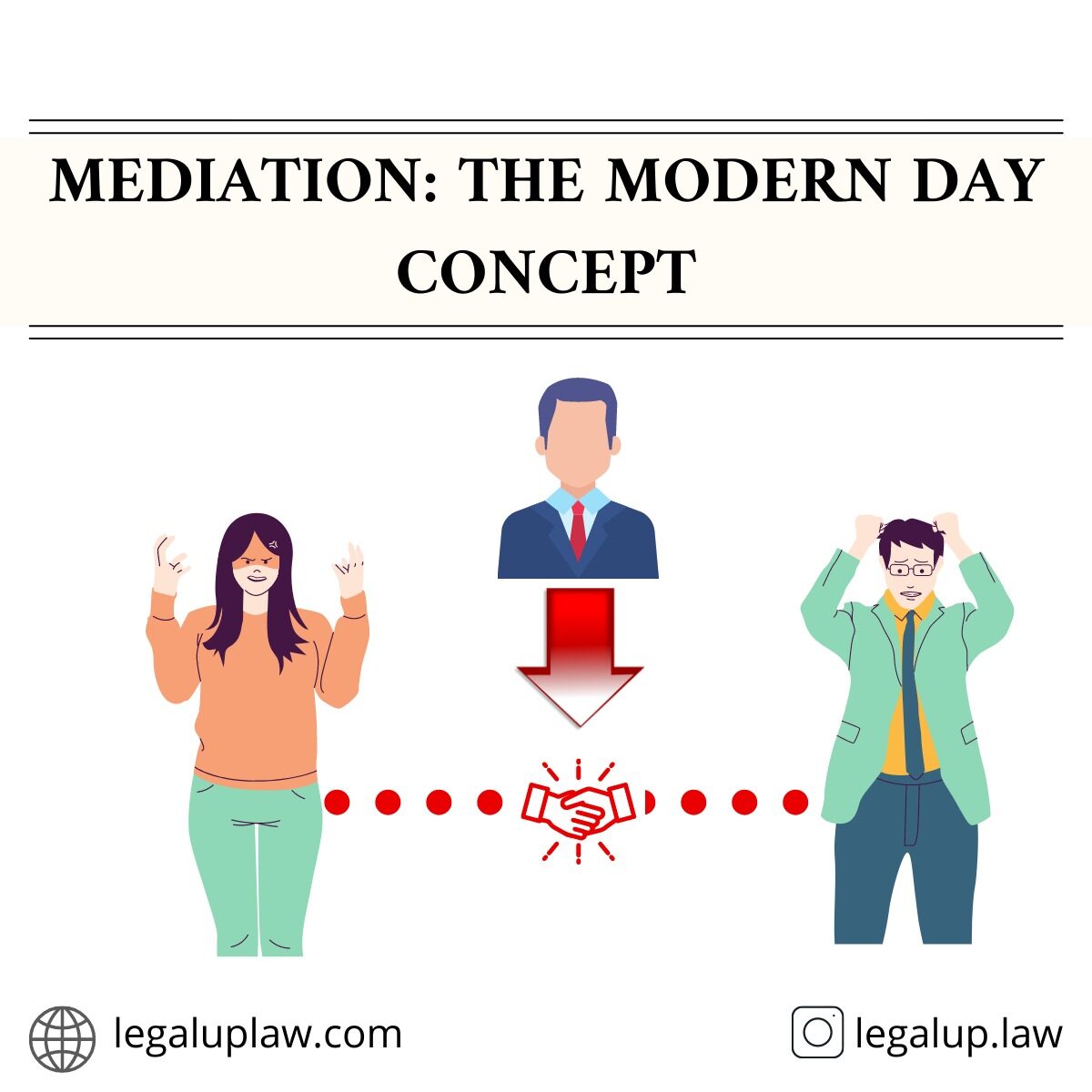 Mediation is basically part of Alternative Dispute Resolution. The Concept of ADR is gradually rising in India. And ADR is the future of the Legal World of Indian Society. It is very evident, as the increasing number of cases in India, the judiciary is not able to justify the same. In Foreign countries, ADR is already part of the routine for the Legal world.

What is Alternative Dispute Resolution (ADR) and what all it constitutes?

Alternative Dispute Resolution Process is out of Court settlement process for the speedy trial. it only applies to Civil Matters and not Criminal ones. it relates to the many components of Civil matters related to contracts, family disputes, property disputes and many such concerns. Majorly, Mediation and Conciliation constitute the ADR. for the in-depth analysis we’ll start for the start, that, what was the probable reason for the rise of ADR.

What are the reasons to approach to ADR?

This could also be connoted as the merit of the Mediation process to list them down:

What is Arbitration process?

Arbitration is another branch of ADR in general. it is a fixed process, which is decided by the parties at premature stages. Arbitration arises, wherein disputes arise, then parties go through a specific, pre-defined way for resolution. Even, the forum to approach is decided in the arbitration agreement by the parties. Herein, the Neutral party leads the process and helps the parties to conclude. In the Arbitration process, Arbitration Agreement is Grund Norm and all the procedure takes place accordingly.

According to the Oxford Learner Dictionaries, Mediation is the attempt to end a problem between two or more people or groups who disagree by talking to them and trying to find things that everyone can agree on. In the Indian context, Mediation is the out of Court settlement to escape the monetary court fee of the case Sole purpose of the mediation is “For the Parties and By the Parties”.

What are the stages of Mediation?

Now coming back to stages of Mediation which plays a very important role in the whole procedure.

INTRODUCTION: This is a very important stage for initiating the Mediation Process. Herein, Mediator has the prime responsibility to introduce the process to the parties. additionally, the mediator promotes mediation to generate interest of parties over the process. he tries to make party introduces to each other, for a better understanding of the genesis of the issue. he tries to convey that Mediation is the process for them only, and he is only the bridging gap between the parties. Consequently, all of this helps parties to ease out their understanding and make it very easy for each other.

JOINT SITTING: At this particular stage, Mediator tries to take out the facts and issues from the parties, in the presence of each other. so that both of them at least heave the facts at the place. after some time of the session, he tries to make his own position between them and tries to establish some ground rules for the further process. he sets these rules for the benefit of both the parties, so that, gradually the starts believing in him.

PRIVATE SITTING: In this very stage, since he is familiar with the need and requirements of the parties, he himself tries to establish some mediating criteria and the solution to the issue aroused. Now he tries to convince the parties individually to their concerned need sitting separately and to come to the particular juncture wherein both the parties do agree.

SETTLEMENT: In this process, parties come to the conceptually settled agreement, wherein both the parties are comfortable with each other and satisfied with their needs. And this is the sole reason to call it Win-Win Situation. There further, in the case of Court referred Mediation, Mediator sends the Settlement agreed to the Referral Judge and he accordingly checks if the same is in any contravention of the Law in force in time. Then Respected referral Judge further passes the decree and orders accordingly.

What is the eligiblity to be a Mediator?

A Person who could be a Mediator for the case under, Rule 3 of Mediation and Conciliation Rules, 2004 by the Hight Court, Session/District Courts, must have the following qualifications given under Rule 4 of the 2004 rules.

The following persons may be enlisted:

People from various State Legal Service Authority(referred SLSA, hereinafter) are promoting Mediation as the customized way to Justice, as there is a lot of traffic en-route Court. So, these SLSA making a substantial role in encouraging Mediation as the there main purpose of understanding. also, they are assisting NALSA for there to provide ground reports from the DLSA( District Legal Service Authority), to maintain Syncronity from within.

Is Mediator the modern day Judge?

With this Admiration and acceptance in the general public, many Jurist believes Mediation to be further on Coming Judicial tenure. Also, opening up a huge venture for the Legal fraternity. With the increasing competition in litigation, many young minds think of joining such a profession after graduation, which could give them instant revenue and fame.

Evidently, since the whole public tries to opt-out of the Court settlement procedure, there is the immediate need for the proper Act for governing such procedure, although it is in a premature stage. Additionally, I am opinionated that, there should be relaxation in the eligibility criterion since the whole System of Mediation is governed by the parties, therefore, a person from the public would be the best rather than the individual who is having decades of knowledge in Law. Also, proper additionally subjects should be mandatorily taught in the Law degrees, as to inculcate knowledge from the beginning only.

What is Epidemic Diseases Act? Everything you need to know.