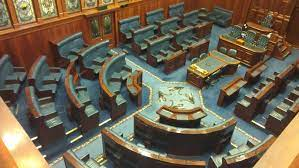 What is the Legislative Assembly?

What is the Legislative Council?

The legislative council is currently there in 6 states only, they are:

An important point is that its members should be 1/3rd of members in the Legislative assembly and it should not be less than 40.

Why is Legislative Council getting abolished?

We have already witnessed the abolishment or dissolution of the upper house in states like Punjab, West Bengal and Andhra Pradesh.