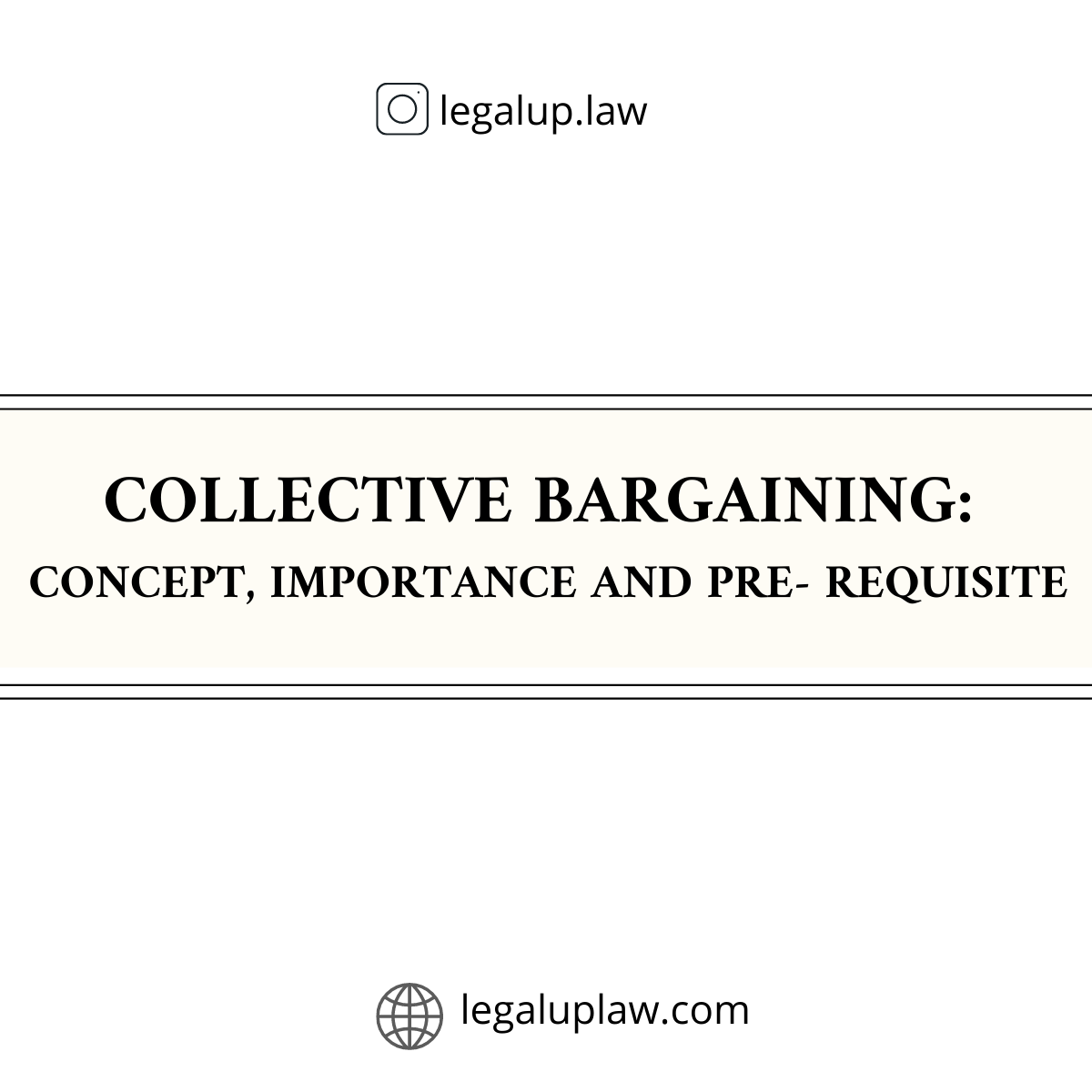 The phrase, collective bargaining was first coined and used by Sydney and Beatrice Webb in their celebrated treatise on ‘History of Trade Unions’ and later, Great Britain came to be known as the ‘Home of Collective Bargaining’.

Even though the term was coined in the year 1891, traces of its use were found back in the year 1874 among coal miners in Great Britain. Coming to India, the concept of Collective Bargaining gained its ground post-independence but like Britain, the traces of its use in India were found around the 1920s in the textile mills of Ahmadabad with the initiatives of the father of the nation, Mahatma Gandhi. The word bargaining means nothing but negotiation.

What is the meaning of Collective Bargaining?

The layman definition for the term collective bargaining can be “a process of discussion and negotiation between two parties, one or both of whom is acting in consent.” Understanding the concept known as collective bargaining one must keep in mind that, it is a bipartite process, i.e., only the employer and the employees are the parties and there is no third-party intervention.

What is the key role of Collective Bargaining?

It is the sole responsibility of the representatives of the management as well as the labour to make honest attempts in solving the problems of both the parties and give likewise solutions that do not taint the faith, trust, respect and confidence of the parties in each other. Peace is the sine qua non however, conflicts are inevitable.

Why is Collective Bargaining best method out there?

Collective bargaining is an opportunity for the labours and workers to achieve industrial democracy. It is an alternative method for industrial dispute resolution just like arbitration, mediation and reconciliation to get out of the maze of litigation. It is likely to mention that the process of Collective Bargaining is the most preferred out of all the above-mentioned methods since it provides an opportunity for both the parties in conflict to sit down together, discuss their problems with each other and find solutions for the same in an amicable, respectable and responsible manner. It creates an open ground for the parties to establish mutually agreeable conditions for each other to maintain peace.

The concept of Collective Bargaining is present at both the craft level and the national level. The standing of the same concept at the state level has been discussed by the end of this paper. The broader meaning of the term ‘bargaining’ is that there is the involvement of negotiation, proposals, offers and counteroffers, by both parties to reach a final and mutual agreement.

What are the theories pertaining to Collective Bargaining?

There are 3 theories in particular that relate to collective bargaining and discuss its very concept. The theories, in no particular order of preference, run as follows-

What are the pre-requisites for Collective Bargaining?

What is the Supreme Court’s take on Collective Bargaining?

Taking the landmark case of Karnal Leather Karamchari Sanghatan (Regd.) vs. Respondent Liberty Footwear Company (Regd.) and Ors, the Court laid down that the Act (Industrial Disputes Act, 1947) On the basis of collective bargaining, strives to promote social justice. The architecture of justice dispensation in industrial adjudication includes voluntary arbitration. As a result, the arbitrator is included in the spectrum of statutory tribunals. When a dispute is brought to arbitration, it is vital to inform the workers about the conflict as well as the arbitrator whose decision will eventually bind them.

They must understand why a case has been brought to arbitration, who their arbitrator is, and what awaits them. They must be given the chance to discuss their opinions with one another and, if required, to present them to the arbitrator. This is the need for collective bargaining and there cannot be collective bargaining without involving the workers. The Union only helps the workers in resolving their disputes with management but ultimately it would be for the workers to make decisions and suggest remedies. As a result, we believe the arbitration agreement should be made public before the arbitrator evaluates the merits of the case. The arbitral award would be nullified if these criteria were not met.

In Tamil Nadu Electricity Workers Federation vs. Madras State Electricity Board, the Madras High Court observed that the whole philosophy of organized labour, as well as its formal recognition in industrial legislation, is founded on the uneven bargaining power that exists between the capital employed and individual workers, or disunited workers, according to the Madras High Court. The core of this movement is collective bargaining, and it is in the interest of labour that Trade Unions and their ability to represent workers who are members of such groups have been given statutory status.

The fact that hinders the successful and smooth functioning of collective bargaining is that the labours are unrecognized and thus, the union party is comparatively weaker.  In addition to this, the division of unions on the basis of political ideologies and weak financial position retards the growth of trade unions. Therefore, the need of the hour is that the Indian government should look into this problem and try to implement a statute that recognizes the trade unions at the central level. Doing so will maintain peace and harmony among the parties and then both will be able to provide the best output and further improve the economy of the country.

What are the legal remedies under Domestic Violence Act, 2005?