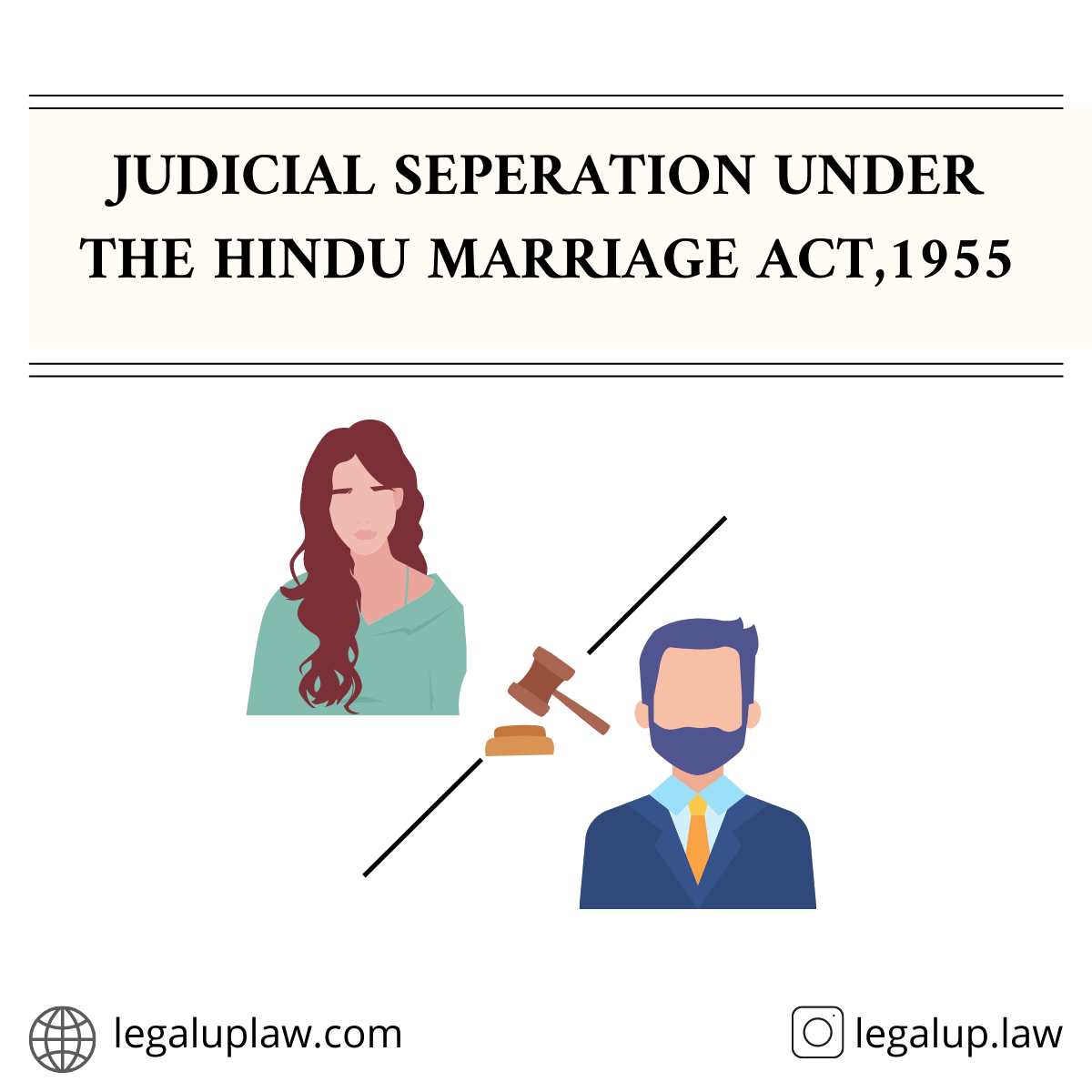 Marriage under Indian Law is a sacred institution and is considered the very foundation of a stable family and a civilized society.

What is Judicial Separation?

One of the matrimonial reliefs available under personal law statutes is judicial separation. Separation is unlike divorce and a decree of separation does not put an end to the marriage it is just that the marriage is put under suspension for a stipulated period. During the time of judicial separation, the legal relationship of the husband and the wife still exists and the two parties cannot remarry. The purpose of Judicial Separation is to enable the spouses to reconsider their position and try to piece their life together in a less emotional and urgent atmosphere now that they are relieved of their matrimonial duties for a little while and think of their future again together.

A cooling-off period is also provided to parties when they file for divorce. Hindu Marriage Act, specifically Section 13-B (2), provides for a statutory period of six months between and the last motion of divorce by consensual consent to explore the possibility of settlement and cohabitation between the two parties. This can also be termed as judicial separation although this period can be waived off under certain conditions.

Essentials to get a decree of Judicial Separation from the Court

When a couple cannot agree on the terms on which they will live separately, any side can petition the courts for a judicial separation judgment. The court must be convinced that:

The court will issue a judicial separation decree if it is satisfied with the above-mentioned facts. The court has the power and may also make orders on child custody and access, maintenance and lump sum payments, property transfers, and the termination of succession rights, among other things. The right to remarry is not granted by a judicial separation judgment.

“(i) that the other party has had voluntary sexual intercourse with any person other than his or her spouse after solemnization of marriage;”

Adultery refers to a situation in which one of the spouses voluntarily engages in sexual activity with someone other than his or her spouse. The offended person might seek remedy in this case, but the intercourse must take place after the marriage.

“(ii) that the other party has, after solemnization of the marriage, treated the spouse with cruelty;”

Cruelty occurs when a spouse treats his or her spouse cruelly or inflicts emotional or bodily anguish on the other after the marriage. The victim has the right to submit a petition alleging cruelty.

“(iii) that the other party has deserted the spouse for a continuous period of not less than 2 years immediately preceding the presentation of the petition;”

“(iv) that the other party has ceased to be a Hindu by conversion to another religion;”

A spouse’s conversion provides a basis for a matrimonial remedy to the non-convert spouse. Conversion refers to a situation under which relief can be claimed if a spouse gets converted into any other religion other than the one that he/she believed in or professed at the time of the marriage (in this case “other than Hinduism”).

“(v) that the other party has been incurable of unsound mind, or has been suffering continuously or intermittently from mental disorder of such a kind and to such an extent that the petitioner cannot reasonably be expected to live with the other party;”

Relief can be sought by a spouse by filing a petition pleading for judicial separation on the grounds of unsound mind of his/her counterpart if he/she suffers from a mental illness, or disease, which might make it difficult for the other spouse to live with the person of an unsound mind. Therefore, the other spouse may seek relief for judicial separation.

“(vi) that the other party has been suffering from a virulent and incurable form of leprosy;”

If one spouse has a condition, such as leprosy, from which he or she cannot recover, the other spouse can file a petition for judicial separation

“(viii) the other party has renounced the world by entering any religious order;” or

Renunciation from the world conveys that the person has given up the world and leading a holy life (under Hindu Law which is also termed as “Sannyasa”). He is considered a civil dead. If a spouse renounces the world to live a holy life, his/her partner can file for judicial separation.

“(ix) the other party has not been heard of as being alive for seven years or more by those persons who would naturally have heard of him/her, had the party been alive;”

If a person is not found for 7 or more years and their relatives or any other person have not heard from him/her or it is believed that he/she may be dead. Here, the other spouse can file for judicial separation.

The wife also has some additional grounds available to claim relief and file for judicial separation in cases such as if the husband after the marriage has been guilty of rape, sodomy, or bestiality, or if a decree or order has been passed against the husband awarding maintenance to the wife as provided under section 125 Cr. P.C or under section 18 of Hindu Adoptions and Maintenance Act, 1956. But in the latter, there is a condition that since the passing of such a decree or order, cohabitation between the parties should not have resumed for one year or upwards;

There is also an option for the wife if her marriage happened before she attained the age of 15 years and she has the right to claim judicial separation as well as repudiate the marriage after attaining that age but before attaining the age of 18 years.

Bigamy is illegal under all personal statutes except Muslim Law. If the husband is remarried during the duration of his first marriage or at the time his first marriage exists and he has a spouse living, both of his wives have a right to claim the petition for judicial separation.

Provisions under various other personal statutes

Under the Special Marriage Act also the position is the same as provided under Hindu Law and the grounds for separation and divorce remain common.

The same is the position under Parsi law as well.

Parsi Marriage and Divorce Act, 1936 states that “any married person may sue for judicial separation on the grounds for which such person could have filed a suit for divorce.”

However, before the amendment of the Parsi Marriage and Divorce Act in 1988, a petition for judicial separation could also be filed on the ground that the defendant had been guilty of such cruelty to him or her or their children, or had used such personal violence, or had behaved in such a way as to render it in the judgment of the court, improper to compel him or her to live with the defendant.

A relief for Judicial Separation is not available under Muslim Law.

Section 22 of the Indian Divorce Act, 1869 provides that a husband or a wife may obtain a decree for judicial separation on the ground of adultery or cruelty or desertion for two years or upwards.

How is a decree of Judicial Separation different from a divorce if the grounds to claim relief under both are same?

Judicial separation is a temporary measure, the main purpose of which is to give time to the parties to re-evaluate their relationship outside their matrimonial obligations. Whereas, Divorce on the other hand leads to termination of the marriage and is permanent as to the fact that the parties are no more husband and wife and their relationship officially comes to an end.

Judicial separation can be sought at any time after the marriage; however, divorce can only be filed after the completion of 1 year of marriage.

The parties can think about their marriage and reconcile it during judicial separation, but they cannot do so during a divorce.

Divorce is mentioned under section 13 of the HMA, 1955, whereas Judicial separation is defined under Section 10 of HMA, 1955.

The decree of judicial separation may be rescinded by the court if the court considers it to be reasonable and just and is satisfied with the fact that the parties have resolved their matrimonial issues and are capable to live together in their capacity as husband and wife and look forward to a future together.

Since a decree of separation does not permanently severe the legal ties and the chances of rehabilitation with each other as husband and wife, the courts depending upon the circumstances of the cases, in response to the increasing number of divorce cases, may issue a decree of judicial separation instead of a divorce taking into account the impact that it might have on the parties, their children, the family as well as the society as a whole.