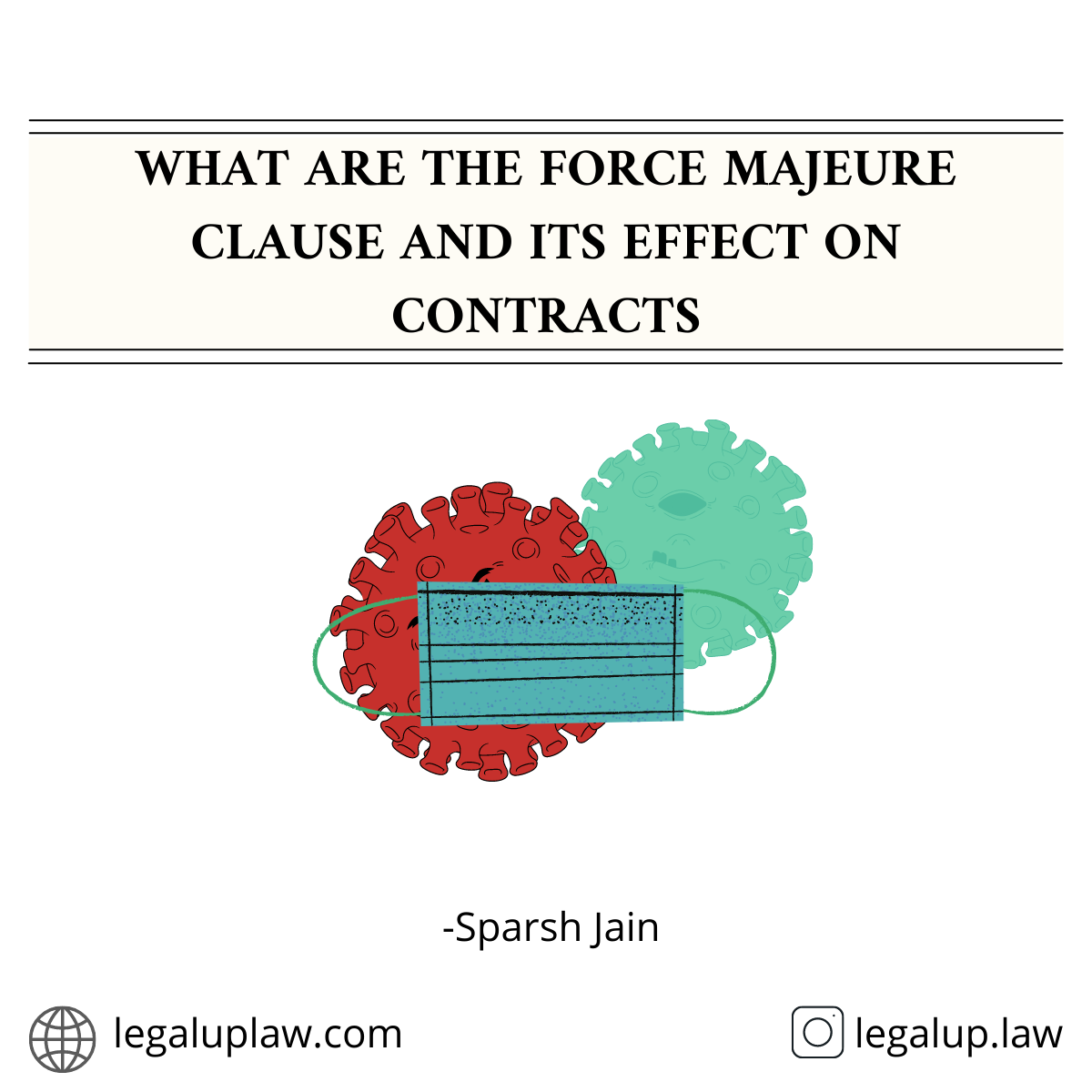 After the first case of a novel coronavirus, originated in China, appeared in December 2020, it did not take much time for it to be declared as a pandemic by the World Health Organization on 11th March 2020 as the virus was spreading at an alarming rate throughout the world.

The entire world came to a halt when countries imposed national lockdowns to curb the spread of Covid-19. The business fraternity had never really anticipated something like this happening and might not have even thought of adding the word “pandemic” or “epidemic” in their force majeure clauses while drafting a contract. Now, that many contracts hinge on ‘Force Majeure’, a series of questions arise on its invocation.

What is the Force Majeure clause?

The term ‘force Majeure’ originates from the Code Napoleon of France, which translates to mean ‘superior force’ or ‘greater force’.

Ordinarily, in terms of general use, it means a drastic or a fundamental change to the substance of the contract that is brought about by an event that was neither anticipated by the parties nor under their control, resulting in non-performance of their contractual obligation.

In India, the concept of force majeure is not codified into the law separately, and therefore it is necessary to coin or mention this as part of the contract. Various precedents have held the force majeure clause when mentioned a contract valid as the contract overrides the law. Therefore, Force Majeure clauses are now part of the standard clauses in any contract along with confidentiality and dispute clauses.

Examples of force majeure events would be an act of God, fire, earthquake, flood, accident, an act of governmental authority, lockout, or any event beyond the reasonable control of any of the parties that hinder the performance or render it impossible.

Most often, drafting a ‘force Majeure clause lacks the inclusion of details. For instance, the majority of the ‘force Majeure clauses, do not specifically mention ‘pandemic’ or even ‘epidemic’ for that matter, as an event. They generally refer to any unforeseen event in a larger aspect.

Does the force majeure clause apply to the National Lockdown?

The inclusion of lockdown and its effects on Indian Contracts depends on various situations as well as how it is argued in the courts of law.

Essentially, COVID-19 will find a mention in contracts in the form of the epidemic, pandemic, or even natural calamity. However, it is noteworthy that where the failure to perform any obligation is primarily due to lockdown implemented by the Government, the force majeure clause must also contain the term ‘lockdown’, for it to be invoked.

One can also argue that since the lockdown is a result of COVID- 19 and the pandemic, reliance can be placed on the term pandemic in a force Majeure clause. Plus the Covid-19 pandemic or the resultant lockdown will not be treated as force majeure if there are other methods of performing the terms of the contract.

While the provisions contained in the Contract Act, 1872 neither define the term force Majeure nor do they typically spell out the specific circumstances and events which would qualify as ‘force majeure events’, nevertheless the references to the same may be gathered from certain specific provisions laid therein.

In cases where the contract entered into between the parties contains an express or implied force majeure clause, defining the type of events, such as war, terrorism, earthquakes, hurricanes, acts of government, plagues or epidemics, etc., the dissolution of the contract would take place under the terms of the contract itself and such cases would be dealt with under Section 32 of the Indian Contract Act, 1872.

A force majeure clause should be construed in each case with close attention to the words which precede or follow it, and with due regard to the nature and general terms of the contract. The effect of the clause may vary with each instrument.

Compensation for loss through non-performance of an act known to be impossible or unlawful. Where one person has promised to do something which he knew or, with reasonable diligence, might have known, and which the promisee did not know, to be impossible or unlawful, such promisor must make compensation to such promisee for any loss which such promise sustains through the non-performance of the promise.

If the force majeure clause has not been mentioned in the contract then it would be governed by the Section 56 of the Indian Contract Act and the rules of Doctrine of frustration would apply in the particular scenario.

But if there is a mention of a force majeure clause in the contract and a situation arises in the future making it impossible for either of the party to fulfil their obligations mentioned in the contract it will come under Section 32 of the Indian Contract Act. Section 56 of the Indian Contract Act creates 2 kinds of impossibilities:
(1) Impossibility existing at the time of the making of the contract, and
(2) A contract, which is possible and lawful when made, but becomes impossible and unlawful thereafter due to some supervening event

The consequences of the ‘force Majeure event will have to be assessed to determine whether it renders the contract impossible, unlawful, or impractical to perform and thereby frustrate its performance. Where it is established that the conditions have materially affected the parties and their obligations and where there is no way to perform the contract during the existence of such conditions, the contract is annulled and both contracting parties are discharged of their subsequent obligations. Under these circumstances, neither party has the right to sue the other party for breach of such a contract.

The Supreme Court had interpreted the concept of ‘force Majeure, in Satyabrata Ghose v. Mugneeram Bangur & Co., under Section 56 of the Contract Act. The Supreme Court in this case held that the word “impossible” ‘has not been used here in the sense of physical or literal impossibility. The determination of whether a ‘force Majeure event has actually occurred, does not centre around its impossibility alone – a mere ‘impracticality of performance’ (given the subject matter of the contract), will also suffice. When an ‘untoward event’ or ‘unanticipated change of circumstance’ changes the very foundation of the contract between the parties, this event will be considered a ‘force Majeure, and the contract therefore impossible to perform.

The Supreme Court in Energy Watch Dog v. CERC also stated that economic hardship cannot be considered a ‘force Majeure event. The judgment also took into view an instructive English judgment Tsakiroglou & Co. Ltd. v. Noble Thor GmbH, in which despite the closure of the Suez canal, and despite the fact that the customary route for shipping the goods was only through the Suez canal, it was held that the contract of sale of groundnuts, in that case, was not frustrated, even though it would have to be performed by an alternative mode of performance which was much more expensive, namely, that the ship would now have to go around the Cape of Good Hope, which is three times the distance from Hamburg to Port Sudan.

The freight for such a journey was also double. Despite this, the House of Lords held that even though the contract had become more onerous to perform, it was not fundamentally altered. Where performance is otherwise possible, it is clear that a mere rise in freight price would not allow one of the parties to say that the contract was discharged by the impossibility of performance.

The Ministry of Finance has for instance, by way of an office memorandum dated February 19, 2020, with respect to ‘Manual for Procurement of Goods, 2017’, clarified and declared the disruption in supply chains which is a result of COVID-19 from China or any other country, such a disruption will be covered as ‘force Majeure.

The Ministry of New & Renewable Energy with respect to solar project developers vides office memorandum dated March 20, 2020, has declared that parties can invoke the force majeure clause to avoid financial penalties if they miss the contractual obligations on account of the COVID-19 pandemic.

It should be noted that the Courts in India follow the contract strictly in terms of force majeure clauses. In a case where the contract must be rescinded on account of a force majeure event, the burden to prove is on the party claiming force majeure. Unless there is compelling evidence that a contract cannot be performed under any circumstance, the Courts do not favour parties resorting to the frustration of contract and termination.

Therefore the force majeure clause would not apply to the lockdown unless and until something so uncertain has happened which has altered the basic fundamentals on which the contract was based leading to the impossibility of the obligation in that contract being fulfilled by the parties.

For example – Delay in supply chains due to national lockdown as the movement was restricted would come under the force majeure clause.